On the Road with Cellist Tomeka Reid

Cellist, improviser and composer Tomeka Reid is one busy musician: leading her own quartet, performing in multiple collaborations, gigging with masters including Anthony Braxton, Roscoe Mitchell and Nicole Mitchell, directing her fifth-annual Chicago Jazz String Summit. Born and raised around Washington, D.C., Reid moved to Chicago in 2000 for graduate school, and returns often, though she’s now based in New York.

She recently spoke with DownBeat by phone while driving to Columbia, Missouri.

Have you been doing a lot of solo sets recently?

No, but I’ve wanted to, and I’ve found in my career that when I want to do something, the universe answers. “OK, here you go—opportunities!” After Columbia, I do one in Glasgow and one at the Big Ears Festival, where I’ll be with the Art Ensemble of Chicago. It’s great; I just have to figure out what to do.

When did you join the Art Ensemble?

In October 2017. It’s always Roscoe Mitchell and Famadou Don Moyé, but there are various iterations of it that often include Hugh Ragin on trumpet, me, Junius Paul or Jaribu Shahid playing bass. We performed with more strings, percussion and Nicole last October at the Ann Arbor Edgefest, and recorded for Pi Recordings for a spring release.

You’ve been touring with Anthony Braxton, too?

I was at the Editions Festival in Stockholm in Braxton’s octet and his Tri-Centric Project Orchestra, led by Ingrid Laubrock on sax, with Kyoko Kitamura singing, violinist Erika Dicker, bassist Carl Testa, Dan Peck on tuba and 10 Swedish musicians. And I performed with Nicole there, her Mandorla Awakening music that we also did in Paris and Amherst in February.

How do you keep all this music straight?

Good question. Improvisation is at the core of it all; that’s the common thread.

Do Braxton, Roscoe and Nicole, all with their own aesthetics, each require different responses or skills from you?

Some have things that are more scored out and certain parameters that they want you to work within, even though improvisation is at the core. Mandorla Awakening is different every time, but its sections are always in the same order. The Art Ensemble may rehearse a piece and not play it, or play part of it, because we start improvising, something sparks and we don’t get to material we prepared. Same thing with Braxton: We’ll have an idea, like a written piece of his Ghost Trance music, but sets go in totally different directions.

It’s always interesting: You’re always in the moment, you can’t go into autopilot on any of it, you always have to be alert and aware. It’s never dull.

When you play solo, how do you separate your music from those influences?

I think about all the situations I play in, the different processes and different improvisational devices I’ve been exposed to, how others have thought about or talked about improvisation, and how that relates to my own improvisations. Then I close my eyes and go for ideas I’ve been working on in my own head. Knowing these other processes, I feel if I get stuck, I have some tools to use, maybe to shift direction if I’m not getting where I want to be.

Yes, I was really surprised by it. A lot of times I do stuff and don’t listen back, especially since I put my quartet record out in 2015 and I’ve been busy full time.

This recording was done in 2015, after the quartet album came out, and I’d forgotten about it, but saw Filippo in 2017 and he said, “Oh, here’s the thumb drive of that session we did.” Then last summer, I came upon it and thought, “This could be good, I’ll check it out.” And, wow, I liked it. I really enjoyed the interactions with Filippo. I know him just through Silvia Bolognesi, from Hear In Now—we’d never played together before and I just went into the studio and recorded. I had fun. 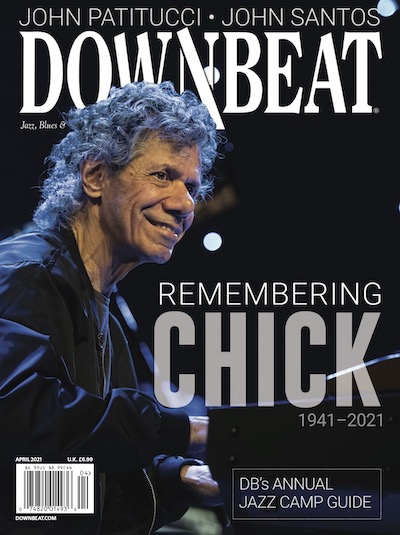