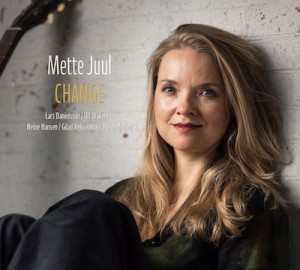 As subjective as attraction to any particular voice can be, there are some singers whose instrument is so pure, unaffected and tuneful that it’s hard to imagine anyone not being drawn to them. Call it vocal charisma.

Danish singer Mette Juul has an exceptionally intimate and unadorned voice, spotlighted on Change by her decision to position herself in the company of four string players. Few vocalists can sing so softly and conversationally while staying in tune and projecting so consistently. And when she soars into full voice, as on Gene Lees’s lyrics to Jobim’s “Double Rainbow,” it sounds effortless.

Solidly in the school of folk-influenced art song, Juul doesn’t make anything sound less than well rehearsed, but her evenly paced delivery compensates for the lack of spontaneity; charisma trumping improvisation. While much of her material—particularly her own compositions like “At Home (There Is A Song)” and “It Might Be Time To Say Goodbye”—is soft and understated, her voice can plunge to darker realms as well. On “The Peacocks (A Timeless Place),” with its superb pairing of Jimmy Rowles’ music and Norma Winstone’s lyrics, she mixes a wistful breathiness with full-throated phrasing that matches well with a spare bass line and subtle acoustic guitar. When she moves in front of the full band, as she does on a stormy version of “Get Out Of Town,” she loses none of the immediacy achieved with just a single guitar.

Recorded by Juul herself in her home and at studios in New York and Sweden, Change shows depth and heart, and makes for an outstanding headphone listening experience.