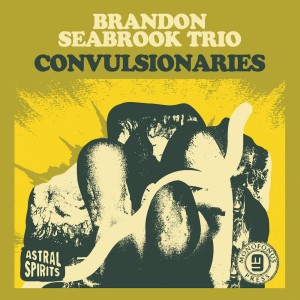 Brandon Seabrook is no stranger to the trio format, but this one is different. Instead of the power-trio setting he’s used to frantic effect with Needle Driver and Seabrook Power Plant, this is a percussion-free string ensemble with cellist Daniel Levin and bassist Henry Fraser.

Seabrook confines himself to electric guitar on Convulsionaries, eschewing both banjo and metal-influenced shredding. But he’s still dealing with rock influences. The choppy chords he lays down at anxiety-inducing tempos and the crabbed picking that pokes out of the cracks between thick bowed textures suggest Robert Fripp’s playing in the 1972–’75 edition of King Crimson, if he’d been stripped of pop influences.

Effects-warped electricity faces off against woody resonance, dramatic bowed passages wrap around terse twangs and grinding riffs challenge prickly pizzicato sound-bursts. Some of the most exciting playing comes during free passages, as during the rustling cello-bass exchange bisecting “Qorikancha.” It’s also in such moments that Convulsionaries’ dourness briefly relents. While the knottiness of Seabrook’s pieces invites and rewards close listening, it would be nice to hear the music open up a bit.