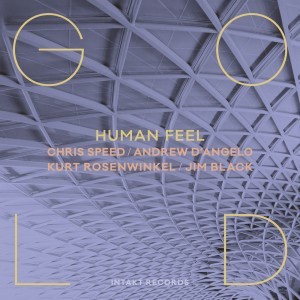 Twelve years have passed since Human Feel released a full-length album. And despite that lag, none of the quartet’s sparkling accord, which dates back to the late 1980s, has been dampened. Spending the past four years working on new material and touring Europe, though,- helps explain Gold’s emotional heft and its rambunctious execution.

The new album exudes the energy, heart and wit of four people who met during their formative years. It’s apparent on the opener, “Alar Vome,” as alto saxophonist Andrew D’Angelo and tenor saxophonist Chris Speed blow a stately chorale melody that Jim Black soon propels with his combustive drumming, while Kurt Rosenwinkel throws another layer of high-jinks energy into the mix with his jangly guitar accompaniment. The energy of “Alar Vome” quickly reaches a tingling ferocity, but Human Feel doesn’t use sonic onslaught to conceal any of the song’s intricate contrapuntal melodicism, striking harmonic invention or brisk interplay. But it’s the more serene moments—and they are plentiful—when Human Feel strikes finer gold: On D’Angelo’s hymnal, “G_D,” his inner-Julius Hemphill is summoned; Rosenwinkel’s “Bass Place” is a stunning masterclass in slow-moving harmonic ingenuity; and Black’s “Martens” finds the guitarist and reedists delivering languid passages across suspenseful drumming.

But Human Feel is at its most capricious on D’Angelo’s stubborn “Numer” and the collectively composed “Lights Out.” On both, the ensemble stretches its free-jazz tendencies the furthest without allowing the pieces to snap completely apart. It’s another testament to the ensemble’s assiduous musicianship. —John Murph