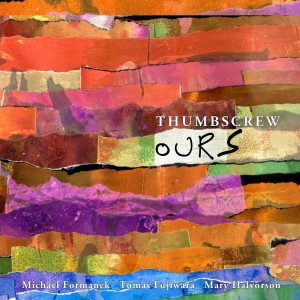 Mary Halvorson’s approach to playing guitar long has felt like she was trying to untangle some great mystery, searching for the right combination of notes and tones that might unlock a secret chamber within her instrument. And on Thumbscrew’s latest albums—a conjoined pair of releases, featuring one set of original material and another of covers—she seems to be getting closer than ever to cracking the code.

Halvorson performs her most impressive calculations on Theirs, the collection that finds the guitarist, drummer Tomas Fujiwara and bassist Michael Formanek interpreting the work of Wayne Shorter, Stanley Cowell and Jacob Do Bandolim, among others. The trio sticks to the melodic core of these often-unorthodox standards, but clearly delights in zooming in on what’s on the lead sheets, until it’s all been turned to fractals.

The trio’s take on Brooks Bowman’s otherwise swaying ballad “East Of The Sun” is chaotic, with each player spilling out phrases and warped notes in crumbling heaps. A softly shuffling run through Evelyn Danzig’s 1949 “Scarlet Ribbons (For Her Hair)” becomes watery and hallucinogenic through Halvorson’s judicious use of effects and Fujiwara’s swimming brushwork. Even more straightforward interpretations, like their sparkling version of Bandolim’s “Benzinho,” are spiked with little moments that fall out of focus or exploratory flare-ups that bristle and surprise.

The companion album, Ours, finds the trio exploring even more varied territory. The nine compositions—with each musician contributing three pieces—run an impressive gamut, from Formanek’s pitch-shifting, almost grunge-like “Cruel Heartless Bastards” to Fujiwara’s more austere work that makes great use of silence and the shimmering resonance of his cymbals.

Halvorson’s pieces on Ours aim for a quiet complexity. “Thumbprint” is built up humbly with a sashaying rhythm and a catchy hook, both of which slowly are exploded and rearranged. The tempo kicks up and the three skitter around like frightened animals, looking to escape from a perceived threat. “Smoketree” follows a similar formula—just with a lot less manic energy.

As a conceptual pairing, it makes sense to have these two recordings arrive in the world together. More than that, Theirs and Ours perfectly encapsulate the rare chemistry that these players have found together, and the musical conflagrations that can emerge when artists find likeminded souls with whom to collaborate.