The one constant about jazz is that it is always changing. This was gloriously illustrated at the inaugural Philadelphia Jazz Festival, where performers extended the legacy of locally trained legends such as John Coltrane and Lee Morgan, drawing inspiration to create exciting new work for the 21st century.

“Whenever a city celebrates its heritage of art and culture, that is wonderful,” said headliner Terri Lyne Carrington between sets at Warmdaddy’s on April 24. “Every major city needs to do that, because you can’t hear it in school and you can’t hear it in church,” the drummer-composer added. “You damn near can’t hear it on the radio.”

Representing multiple genres and generations and coinciding with Jazz Appreciation Month, the festival became a reality with a huge assist from brothers Robert and Ben Bynum, who have launched several local restaurants that feature jazz. Their non-profit organization, the Philadelphia Jazz Experience, assists local and international jazz artists, with added support from Philadelphia’s Office of Arts, Culture and the Creative Economy.

The Philadelphia Jazz Festival aims to ensure the city “is recognized for its rich jazz heritage on a national level,” according to Harry Hayman, the executive director. He said that a secondary purpose of the festival is to “get everyone [at the city’s venues] working together during the course of this one week … and hopefully, that will get everyone working and talking together for the other 51 weeks of the year, as well.”

The festival takes place in numerous neighborhoods, from Center City, the central business district, to Fishtown, the former heart of the commercial shad fishing industry, to University City, home of the Ivy League’s University of Pennsylvania. “We made sure we had a footprint throughout the city,” Hayman said.

One of the festival’s emerging themes was finding new forms of artistic expression in the legacy of past jazz giants. Carrington’s first set at Warmdaddy’s—a soul food restaurant-bar near the South Philly waterfront—exemplified how today’s jazz stars are bending long-held conceptions related to the playing of their instruments. Many other jazz drummers have a busy style, frequently blurring the line between solo and accompaniment, but the Grammy-winning Carrington separates herself from the pack by being more of a painter than a pounder; her métier is creating a passionate statement, in the manner of an abstract watercolorist.

Carrington’s creative, expressive style—which was spotlighted during her stint as the house-band drummer for Arsenio Hall’s late night TV talk show in the late ’80s and early ’90s—was on full display in Philadelphia. It was the highlight of an exhilarating rendition of “So What,” into which all five of her collaborating musicians jumped with gusto, including Cedric Napoleon, bassist for the Philadelphia r&b and jazz group, Pieces of a Dream.

Carrington shared the program with fellow drummer Lil John Roberts, a native Philadelphian who has worked with a plethora of artists, including Janet Jackson, Elton John and Stevie Wonder, as well as jazz stars such as Herbie Hancock, George Benson and Quincy Jones. Before demonstrating their drum chops, Carrington and Roberts both were the focus of folksy onstage interviews conducted by Fatin Dantzler and Aja Graydon, the ebullient husband-and-wife team who comprise the classic soul and r&b duo Kindred The Family Soul.

Meanwhile, across town at Chris’ Jazz Café, a premier jazz showcase in Center City, pianist Emmet Cohen found new delights in the work of the music’s veterans. Those who have checked out Cohen’s Masters Legacy Series, devoted to collaborating with artists such as drummer Jimmy Cobb, would not be surprised to learn that his set—featuring bassist Russell Hall and drummer Bryan Carter—gelled with joyful glee as the musicians delivered standards such as “That Old Feeling” and “Over the Rainbow.”

Throughout the set, Cohen’s trio displayed tremendous technical skill and daring, yet never lost its way emotionally. Gifted jazz players occasionally can become so focused on pyrotechnical displays that they lose track of a song’s emotional heart, but at this show, supreme instrumental command enhanced the adventurous feeling. 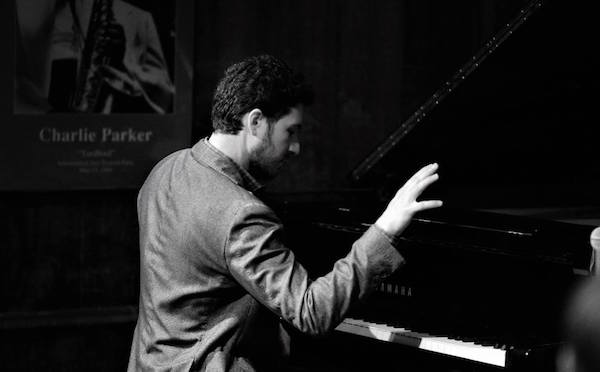 For Cohen, the value a musician derives from comprehending the contributions of jazz greats is on a par with the benefits of knowing one’s own family tree. “In your family, the better you know your parents, the better you know yourself,” Cohen said. “The further you go back [to study] how your parents developed, the more you are going to know about yourself; the further you are going to be able to take yourself into the future.”

Among the other musicians at the festival were Joey DeFrancesco, a native of Springfield, Pennsylvania, who topped the Organ category in the 2016 DownBeat Readers Poll, and keyboardis ELEW (aka Eric Lewis), the recent recipient of a star on the Philadelphia Walk of Fame.

The festival includes an Education & Outreach component with several events throughout the week. Partnered with local organizations such as the Kimmel Center, Jazz Lives Philadelphia and Jazz Journeys, youths and seniors were invited to attend a “Meeting with the Masters” program, various meet-and-greet events, public discussions, luncheons and more.

To celebrate International Jazz Day on April 30, singer and pianist Bob Dorough, who is 93 years young, will perform at the venue South (600 N. Broad Street), playing sets at 7 p.m. and 9 p.m.

Also on April 30, vocalist Jaguar Wright and bassist Gerald Veasley will pay tribute to Nina Simone (1933–2003) with a 6:30 p.m. show at the Ardmore Music Hall. Doors open at 5:30 p.m. at this suburban venue, located at 23 East Lancaster Avenue in Ardmore.

For more info on the Philadelphia Jazz Festival, visit the fest’s website.