The first of three consecutive sold-out nights, the performance served as a de facto final dress rehearsal as he, drummer Justin Brown, keyboardist Dennis Hamm and their live crew seemed to be getting their tour legs under them again. The result was an at times uneven yet ultimately impressive 100-minute set.

(There was talk after the show around the main mixing board about how Brown wasn’t able to make his flight out of New York due to weather. So a pre-Opening Night rehearsal—and presumably an extensive soundcheck—had to be cancelled.)

Thundercat’s power trio is on the road in support of his third album, Drunk, which is due out Feb. 24 via Flying Lotus’ Brainfeeder imprint. (Brainfeeder is also home to tenor saxophonist Kamasi Washington’s popular 2015 release The Epic, on which both Bruner and his brother, drummer Ronald Bruner, Jr., played.)

The trio gave the enthusiastic fans a preview of Drunk by opening with its first two tracks, “Rabbit Ho” and “Captain Stupido.” The bandleader’s effortless falsetto and nimble six-string bass guitar playing were both on display immediately, though the vocals on the up-tempo songs tended to be buried in the mix throughout the night, making it difficult to discern the lyrics at times.

Brown’s intense drumming recalled a blend of the thrash that Thundercat played as a member of the hardcore punk band Suicidal Tendencies and a more flexible drum-and-bass style. Hamm played a pair of stacked keyboards at a 90-degree angle with a Fender Rhodes facing the audience and what looked like an analog keyboard pointing toward center stage.

Thundercat soloed furiously on “Rabbit Ho,” his bass sounding like one of his keyboardist’s analog instruments. Meanwhile, Hamm laid down a calming series of chords on the Rhodes. To create a militaristic feel on “Captain Stupido,” Brown initiated a rhythm that at first focused on hi-hat and one of his two snare drums with Hamm adding a left-handed ostinato.

Ending that number by “meowing” and then declaring that “Everyone wants to be a cat,” Thundercat offered a glimpse into his humorous side. (He also quipped that he couldn’t hear himself while he was singing.)

With another humorous jab, Thundercat then jokingly welcomed vocalist Michael McDonald to the stage. The yacht-rock legend—who did not actually appear at this performance—contributed vocals to “Show Me the Way,” the first single off of Drunk, along with fellow classic rocker Kenny Loggins. And McDonald did join Thundercat on keyboards and vocals last September at the Hollywood Bowl.

But Thundercat alone created enough sonic variation to with his bass guitar to fuel an entire orchestra. By processing his instrument through different effects, he alternately could sound as if he was soloing on electric violin (as he did on “Jethro”), Vocodor (“Captain Stupido”) and even keytar (“3 a.m.”). His instrumental prowess is arguably the most impressive of his four-quadrant skill set: playing bass, singing, producing and songwriting.

About a third of the way through the concert, the tempo was slowed down and the volume seemingly lowered a bit, making it easier to hear Thundercat’s singing and better appreciate each member’s contribution. “Friend Zone” and “I Am Crazy,” both from Drunk, goaded whole swaths of the audience to sway, while “3 a.m.” (also found on Drunk) utilized a heavy, nosebleed-level bass tone and a groove that Bruner may have picked up while working and playing with funk godfather George Clinton. 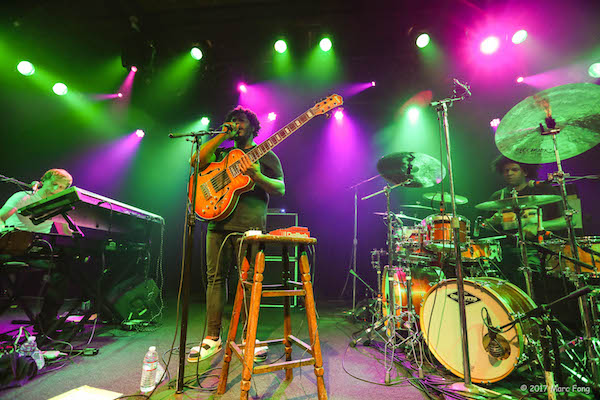 The three bandmates interlocked impressively, alternately prodding and supporting one another, during “Lone Wolf And Cub.” Brown explored his entire drum kit after Hamm dug into a doubletime solo. Thundercat even cooed wordlessly toward the end to nice effect.

Flying Lotus’ “MmmHmm,” which Thundercat co-wrote and on which he sang and played bass, got an extra enthusiastic response as that release may very well may have facilitated many a musical introduction to Bruner. During the title track, he yelled out “Al Jarreau” in honor of the vocal great who had died earlier that day.

That homage was likely unintentionally extended to the late George Duke, Jarreau’s frequent collaborator, by covering Duke’s “For Love (I Come Your Friend)” during the encore. As heard on his debut album, The Golden Age Of Apocalypse (Brainfeeder, 2011) Thundercat’s interpretation is more ambient and less beat-driven than the source material while still remaining appropriately soulful.

During the first encore number, “Lotus And The Jondy,” the trio morphed into a compelling three-piece dance band. The jubilant audience shouted in unison, and Hamm’s synth strings transported that small segment of San Francisco back to the disco era.

This three-show run served to set the trio up for their 2017 tour, including subsequent dates in Israel, Istanbul and Japan, as well as dates in Europe and at the Coachella Valley Music and Arts Festival.

On Feb 24, the release day for Drunk, the group will perform at Fine Line Music Café in Minneapolis. DB

Note: To read a review of Thundercat collaborator and fellow West Coast Get Down member Miles Mosley’s performance at the El Rey Theatre in Los Angeles. Click here.