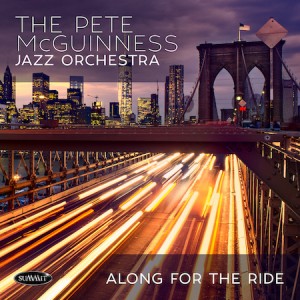 In his third outing with this dynamic crew of New Yorkers, trombonist-arranger Pete McGuinness has his way with some familiar tunes, while introducing four stellar originals.

The collection kicks off in ebullient fashion with “Put On A Happy Face,” a tune that’s given a new suit of clothes here through McGuinness’ inventive interplay among horns, bass and Scott Neumann’s lively, understated drumming. With the spirited opener, McGuinness instantly identifies himself as an arranger with an active imagination and an urge to swing. His “Old Roads” carries a tinge of melancholy and features a highly expressive flugelhorn solo from Chris Rogers. A playful take on Nat Adderley’s “Jive Samba” serves as an earthy launching pad for robust solos by trombonist Matt Haviland and baritone saxophone ace Dave Riekenberg, while his suite-like “Aftermath,” a showcase for Dave Pietro’s soprano saxophone, bears the stamp of Bob Brookmeyer.

As a vocalist, McGuinness has a warm, inviting tone and natural ease of phrasing. He showcases some persuasive scatting on Michel Legrand’s “You Must Believe In Spring,” while channeling his inner Chet Baker on “May I Come In.” The flag-waving closer, “One For The Maestro,” is a Basie-esque swinger that also pays homage to McGuinness’ high school band director, Bill Stanley.