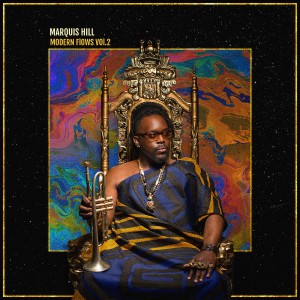 “My flow is rooted,” asserts the album’s first line, and it’s not just swagger. Modern Flows Vol. II moves as naturally among jazz, hip-hop and r&b as any album to date.

The 31-year-old Marquis Hill was a trumpet student during neo-soul and experimental hip-hop’s heyday, and even more critically, at a time when heroes Roy Hargrove and Nicholas Payton were bringing those styles to jazz. Like players from previous generations, Hill heard everything—the difference is that the trumpeter came into his musical sensibility at a time when everything already belonged together. His genre exchange has the ease of a walk across the street to a friend’s place. Skill fashions this flow: Bassist Junius Paul and drummer Jonathan Pinson lay down dynamic grooves with golden tiger-rare vibraphonist Joel Ross, whose rhythmic-more-than-chordal approach leaves space for rappers and instrumentalists to roam. Hill’s continued devotion to craft helps him improvise Donald Byrd-inspired ideas over lengthy grooves, and his lyricism perfectly suits spoken-word artists.

Intergenerational jamming in Chicago with Fred Anderson and Ernest Dawkins during Hill’s high school years also gave him a supernatural link to tradition. On “Stellar,” he applies a Count Basie melody-only idea as if it came from a peer; on “Ego Vs. Spirit,” he quotes “Caravan” without a hint of self-consciousness. His mid-century Blue Note horn voicings are anything but nostalgic—like every element here, they just happen to work for Hill. Best of all, he’d never think to convince us of that.