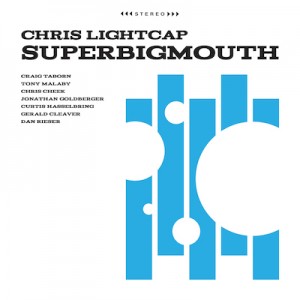 Growing up in a steel town near Pittsburgh, Lightcap’s musical curiosity was sated by his parents’ classical music collection and “tons and tons of rock ’n’ roll.” This heritage comes through on SuperBigmouth via distortion-edged guitar chords, while his love of West African music is heard in skittery drums and interlocking horns.

SuperBigmouth unites Lightcap’s two bands: the two-guitar, drums (plus guests) Superette with Bigmouth, the group that released the much-hailed Epicenter back in 2015. And it works beautifully.

With its almost 9-minute duration, “Zero Point Five” is thick with drowsy swagger. It starts in a classic rock formation, bass foregrounded against the patter of drums to meld in the other instruments. “Deep River,” meanwhile, begins with an atmospheric ’90s alt-rock vibe, the purity of the horns intersecting with the muted rhythm section, until Craig Taborn’s stylishly retro organ tips in.

When asked why he formed the two-guitar band Superette, Lightcap said that he was intrigued by “the way the guitar overtones combine” to create a “spectral quality.” Something similar might be said about SuperBigmouth. Yet, despite the endless echoes of other genres and cultures, the music remains coherent and clear in its intent.