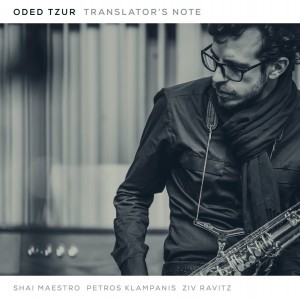 Urgency coexists with Zen-like calm on the darkly brilliant sophomore album by tenor saxophonist Oded Tzur. The dynamics of his fearless quartet mirror its ever-shifting storytelling intent. This album ripples and resonates.
Tzur’s enigmatically titled tunes speak to the underlying purpose of this group, as do Tzur’s literally fabulous liner notes. Whether the subject is the watery feel of “The Whale Song,” the turbulent journey of “Single Mother” or “The Three Statements Of Garab Dorje,” the Oded Tzur Quartet tells stories.

Tzur’s tunes experiment with di erent forms of narrative. The “Dorje” cut, which references a Tibetan Buddhist oracle, feels like a conversation, Tzur commenting on Shai Maestro’s pearly piano, Petros Klampanis’ thrumming bass and Ziv Ravitz’s feathery yet fierce drums. The songs, imbued with a profound melodicism, are dramatic and absorbing, and the interplay transcends empathy. There is nothing ragged about this ensemble.

A student of Indian classical music, Tzur is an architect of stealth, meticulously building his tunes from the ground up. At times, his very quietude seems to roar; the way he starts and ends “Single Mother” suggests a volcano on the ocean floor. An explorer of the microtonal and a player of such restraint and patience that his explosions are particularly startling, Tzur delivers a unique sound, giving his instrument pioneering dimension and depth. At times, his tenor saxophone grazes a flute’s timbre; at others, it plumbs the depths of a bass clarinet.

The one cover is John Coltrane’s “Lonnie’s Lament.” While not as schematic as the original, Tzur’s version is relatively brief, leisurely and incantatory, capping a recording of enormous emotional pull.