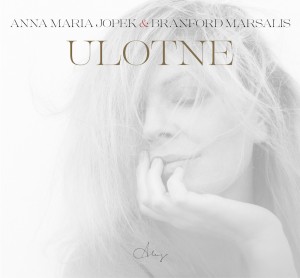 The recent death of trumpeter Tomasz Stańko and the rise of pianist Marcin Wasilewski’s trio have reiterated the close alignment between improvised romanticism and the Polish predilection for minor keys and dark, poetic expression. The connection is as compelling as the link between American blues and Andalusian duende.

Polish vocalist Anna Maria Jopek initially was attracted to Branford Marsalis’ playing when she heard him in Sting’s band. And the attraction carries through to how she uses him on Ulotne—principally on soprano saxophone—to add color to her expressive voice, and to provide a second lead instrument to soar above the resonant mix of percussion and bass.

The Polish folk song “W Polu Lipenka” builds from a keening, acerbic string movement to fiery wordless vocalizing by Jopek. Mino Cinelu’s drums lend depth and help transport the song from central Europe to Northern Africa. “Pozegnanie Z Maria,” which begins the short second disc, is dedicated to Stańko, and sways with the melancholy stoicism that dominated much of his music. Marsalis solos with gentle beauty over Wasilewski and the Atom String Quartet.

Non-English-speaking singers face the challenge of having to express themselves enough to transcend the language barrier for American audiences, but like Celtic vocal explorer Loreena McKennitt, Jopek has the ability to make that barrier immaterial. The meaning of these songs is clear, even if you don’t understand Polish.