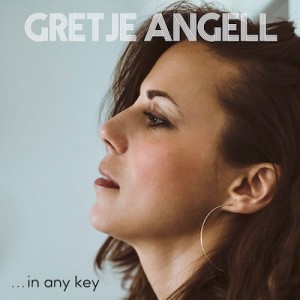 Not the least impressive aspect of vocalist Gretje Angell’s debut recording is how consistently she maintains a warmth and accuracy of tone, even when the meter is fast. It might help coming from a dynasty of drummers—dad and grandad both played the traps. But one senses that her real gift is for the natural cadence of a lyric. That’s evident even in the Portuguese of “Berimbau,” on which she sounds like she hails from Bahia, rather than Akron. But it shows, too, on a perfectly paced “Do Nothing Till You Hear From Me” and a bossa version of “Love Is Here To Stay.”

She also has a secret weapon. The album title is a reference to guitarist and producer Dori Amarilio’s apparent ability to deliver a song exactly where Angell chooses to place it. He’s featured prominently on three duo readings of “Them There Eyes,” “One Note Samba” and a brilliant “Tea For Two.”

Albums a little—but only a little—like this used to murmur away in wine bars and nouvelle cuisine restaurants, but Angell doesn’t do wallpaper music. Every track has purpose, intent and quality. A truly impressive arrival from a singer who’s worked hard to get here.