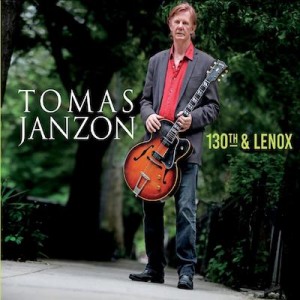 There’s an authority to Tomas Janzon’s playing, but it’s generous, open, masterful and gracious. His collaboration with two distinct sets of musicians on both the East and West coasts model sterling ensemble play and a commitment to showcasing the tunes and their possibilities, rather than just the virtuosity of the collected players.

This is especially true of the tracks featuring the East Coast combo: stellar vibraphonist Steve Nelson, bassist Hilliard Greene and drummer Chuck McPherson. Nelson and Janzon often double, expanding the harmonic range of both their instruments, creating a sweet synthesis. On “Softly As In A Morning Sunrise” their solos and breaks are concise and conversational. For the Janzon original “Somewhere Over Stockholm,” the bandleader leaves Nelson plenty of space on a bass-driven, minor-key march that serves as the bridge, before answering him with characteristically understated elegance in his own solo. Also from the East Coast sessions comes the slightly retitled, casually acerbic “Have You Met Ms. Jones.”

The California sessions feature bassist Nedra Wheeler and drummer Donald Dean, and a take of Sam River’s “Beatrice” highlights the group’s fidelity to melody, as do its versions of Wayne Shorter’s “Iris” and Thelonious Monk’s “Monk’s Mood.”

Irrespective of the coast, 130th & Lenox is a recording that celebrates bonhomie and sharing, a welcome message for these times.