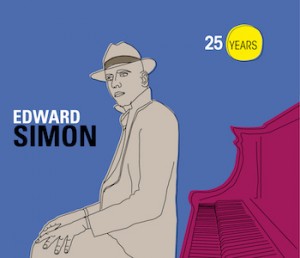 During Edward Simon’s lengthy career, his profile as a go-to sideman rose with gigs for heavy-hitters like Terence Blanchard. His own 13-disc catalog as a leader has received less attention, but 25 Years works to correct the lapse. For the pianist’s elegant two-disc retrospective, he gathered 17 carefully constructed pieces (five are covers) that speak to the fascinations of Simon’s upbringing—the beats of Venezuela, where he was born, the rigors of classical training and the jazz idioms of the States. The first disc, featuring mostly small ensembles, introduces several of Simon’s concepts, including his fleet, angular soloing against thrashing congas on “Fiestas.” It’s on the second disc, through large ensemble works, that Simon unveils the breadth of his vision. A suite tenders a mellifluous symphonic theme on “Uninvited Thoughts” and a ferocious harp solo recommends “Barinas,” a lesson in how to pack 25 years of excellence into nine minutes.