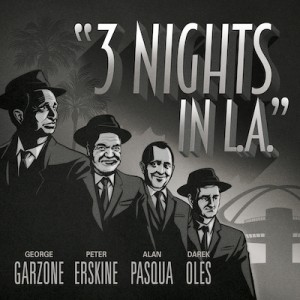 During three rainy January nights in Los Angeles earlier this year, a pack of veterans took the Sam First stage, aiming to showcase their accrued gifts. With a mix of originals and standards, the resultant three-disc set’s simply a delight. The quartet takes Rogers and Hart’s “Have You Met Miss Jones?” for a couple of spins, saxophonist George Garzone carving out the melody while the talents of pianist Alan Pasqua are prominently featured. Carrying on with Kern and Hammerstein’s “All The Things You Are,” listeners get a sense of the band’s appreciation of its component players. Alongside the classics, there are originals by each performer here, including Garzone’s “Dedicated To Michael Brecker” and his eloquent “To My Papa.” Drummer Peter Erskine’s “Twelve” has fun chasing decades, moving from bebop to contemporary, with the band fusing into a mysterious cohesion as Garzone and Pasqua add their distinct flavors throughout. By the final night, the ensemble’s locked in, and as it lays down Coltrane’s “Equinox,” the quartet reaches transcendence.