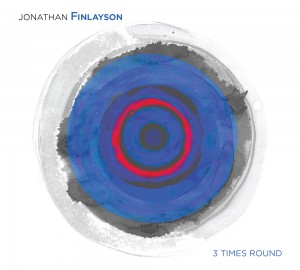 3 Times Round is Jonathan Finlayson’s first album to dispense with a band name. Its predecessors were co-credited to Sicilian Defense, and both were performed by quintets that included piano and guitar—with Finalyson’s trumpet as the only horn. This time, he’s dropped the guitar and added two saxophonists. The shift in nomenclature also implies that he’s not just playing with the band; he’s using it as an instrument.

While the players are given ample chance to display their skills, it’s the lucid, but shifting, frameworks that command the listener’s attention. Behind the sequence of horn solos on “Refined Strut,” a series of intricate countermelodies and rhythms repeatedly are displaced by added rests and detours. There are lengthy stretches on “The Moon Is New,” the album’s 14-minute centerpiece, where you don’t hear Finlayson’s trumpet. Instead, the music moves dynamically from one discrete structure to the next. First, Craig Weinrib’s drums rustle like barely perceptible leaves behind Matthew Mitchell’s bold keyboard figures. Then a gentle piano-and-bowed-bass duet eases toward near silence, only to abruptly cut to a full-band passage that expresses a melodic double helix.

Finlayson’s music is intricate and unpredictable, but it never feels unfamiliar. The instrumental lineup corresponds to the early-’60s Jazz Messengers, and there are moments when Finlayson seems to tip his hat to his longtime employer, Steve Coleman, and frequent comrade Steve Lehman. 3 Times Round presents Finlayson as a composer and bandleader working within a continuum that connects mid-20th century jazz to the newest developments of his contemporaries.