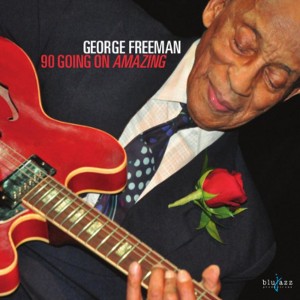 Though somewhat misleading in title since the session took place a dozen years ago, recent live shows have attested that in his 90th year, the inimitable Chicago-born guitarist George Freeman remains undiminished. Aboard here are hard-pocket bassist Jack Zara (onetime cohort of big brother Von Freeman), drummer Kevin Patrick and singer-pianist Vince Willis—a serviceable team set to lock Freeman in swagger mode. And swagger he does on the worldly, deant “Summer Wind,” plus his own epiphany—which might as well refer to his signature guitar style—“You Are Mine All Mine.”
Veterans like Freeman know the importance of the right tempo for a trenchant groove, and the slow-to-medium stomps of “That’s It,” “Steppin’ With George,” “Contaminated” and “The Bottom” occupy his sweet spot. The latter demos some of Freeman’s legendary low-end action, although he doesn’t dive depth-charge-deep in deference to a flirtation with “Here Comes The Bride.” Willis takes an emphatic but kaleidoscopic solo, injecting boogie-woogie licks, but the mix underserves Zara. The bassist’s cooking skills are better evident on “Hit It,” a welcome uptempo cut on which the leader’s hardscrabble chicken scratch is particularly joyful.