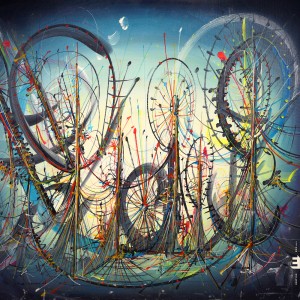 There’s only a slight difference between a hodge-podge and a potpourri, and if I recall correctly it has to do with confusion and order, or in the case of this new Jeff Ballard disc, variety and design.

Ballard’s ensemble has been together for several years, and Fairgrounds collects a fetching and far-flung program recorded in various locales during a spring 2015 tour that stretched from Dublin to Rome. Rather than focus on a uniform sound, Ballard’s quintet spreads the cards on the table and yields to the adventures of plurality. From eerie drones to brutish skronk and dreamy lyricism, the music is as skittish as it is inclusive.

That last descriptor is key. An array of inspirations fuel jazz right now, and several of the era’s compelling improvisers find ways to apply them without having them fully define the music at hand. That’s what happens here, as guitarist Lionel Loueke and pianists/keyboardists Kevin Hays and Pete Rende unite with the drummer and his electronics accomplice, Reid Anderson. Using acoustic and electric instruments to underwrite a wealth of textural blends, the program never sits still or repeats itself. The itchy reflection of “I Saw A Movie” is divorced from the raucous overload of “Twelv8,” which adds tenor saxophonist Mark Turner to spray the sky with upper-register exclamations. “Marche Exotique” touts pulse, while “YEAH PETE!” milks mood. The music is both physical and ethereal, and at times it feels as if the entirety of Weather Report’s canon is on shuffle. Rather than clashing, these utterly distinct gambits find several ways to coexist—and occasionally thrive.