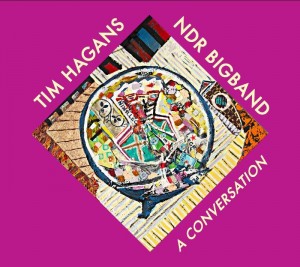 A Conversation is trumpeter-composer Tim Hagans’ fourth collaborative recording project with Germany’s esteemed NDR Bigband, also known as the Hamburg Radio Jazz Orchestra. This time around, the 66-year-old Hagans takes on the roles of composer, conductor, arranger and performer in a five-movement concerto that revolves around a single concept: the exchange of ideas. With A Conversation, Hagans experiments with a truly fresh approach to big band arranging and recording, whereby he physically groups musicians together not according to instrument type, but by sonic and emotional divisions. Each grouping is charged with different artistic objectives determined by Hagans, adding to the instrumental intrigue. So, instead of a traditional four-line woodwinds/trombones/trumpets/rhythm setup, you get four mini ensembles of varying instrumental combinations within a single large orchestra playing off of each other in mysterious and evocative ways. One grouping that Hagans calls Ensemble I includes two woodwind players, three trumpeters and a trombonist. The slightly smaller but equally vital Ensemble II consists of two woodwind players, trumpet and trombone, while the four-piece Ensemble III has one reed player, one trumpeter, one tenor trombone and a bass trombone. Ensemble IV is the full rhythm section of drums, guitar, piano, bass and percussion. The music builds from simple ideas and minimalist concepts into complex constructions of towering and deep proportions. Hagans brings his instrumental voice to the discussion on three of the movements, soloing his heart out with all the post-bop enthusiasm you’d expect from the scrappy improviser. Ultimately, A Conversation is far more than just talk; it’s an astounding accomplishment by one of the leading visionaries of the international jazz scene.