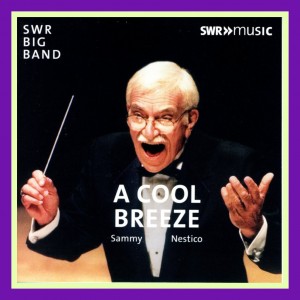 Sammy Nestico, the composer-arranger known for his contributions to the Count Basie Orchestra library and whose name is familiar to anyone who’s played in a big band since the 1960s, recently has gone through a highly creative and productive phase. The rise of Nestico’s international profile has been sparked by a period of collaboration with the SWR Big Band of Germany that has produced several masterful albums, including No Time Like The Present (2004), Basie-Cally Sammy (2005), Fun Time (2009) and Fun Time And More (2011). The productive streak continues with this year’s A Cool Breeze, which finds the perpetually developing, 93-year-old orchestrator combining swing, soul, funk, fusion and symphonic expressions in a stylistic manner that’s distinctly modern yet undeniably Nestico. Unlike his previous SWR collaborations, Nestico (who’s based in San Diego) wasn’t able to travel to Germany for these recording sessions, but digital technology allowed him to participate via Skype and high-speed audio file transfer. His signature syncopations, volleying counterpoint passages, tensely stacked fourths, dramatic dynamics and tasteful manner of combining instrumental timbres are all manifest in the SWR Big Band’s impeccable, inspired performance. These dedicated musicians have become so adept at finessing and interpreting Nestico’s work that they actually transcend what’s on the printed page. They turn his carefully crafted charts into memorable works of art that will have toes tappin’ and fingers snappin’ for decades to come.