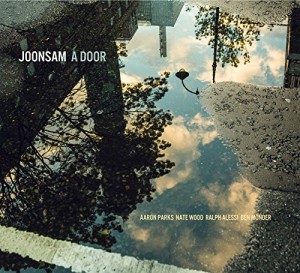 Perfect for a rainy day inside, bandleader and bassist Joonsam’s debut album, A Door, is an eclectic offering that documents the musician’s past experiences in New York City. A classically trained bassist from Seoul, South Korea, Joonsam has lived in the city for nine years, having played various settings there. On his latest effort, he absorbs and expands upon the intricacies of each.

There’s a strong emphasis on orchestration—each of the compositions pulls you in soon after the piece begins. It’s easy to hear the influence of symphonic music and Korean folk songs in Joonsam’s playing, but he still allows each tune to feel loose, organic and distinct.

While this album is primarily a trio project, the bassist experiments with the texture of the program by varying the instrumentation. Ralph Alessi’s trumpet playing is featured on several songs, and Ben Monder plays energetic guitar on two tracks, but the trio is joined by slightly more uncommon voices on three other tracks. “Love Trauma” features airy and wordless vocals from Yeahwon Shin, and earlier on the album, a clear-toned harmonica is played by Yvonnick Prene, establishing a breezy, laidback feel.

The most unexpected voice is the bamboo flute played by Chung Eun Han on “Doraji The Flower,” the only piece not composed by Joonsam (it’s a traditional song from Korea). Yet despite its unconventional instrumentation, the song’s folk origins help it blend seamlessly with the other simple, nostalgic melodies on this disc.

With poise and grace, Joonsam and his ensemble create free-flowing music that will cause you to reflect on your own recent memories, painting pictures that will make your heart full. They might not be similar to the New York experiences Joonsam had when composing, but this music translates effortlessly, catering to listeners and their experiences.