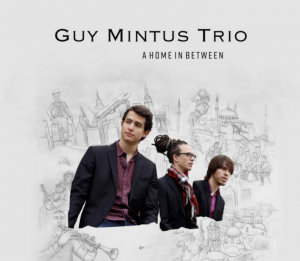 In the summer of 2016, Israeli pianist Guy Mintus and Czech animator Jakub Cermaque traveled through Israel on a journey to find cities that embodied coexistence. In each of the five stops on their tour—Abu Gosh, Ramla, Zefat, Be’er Sheva and Kfar Qara—they performed the song “Our Journey Together,” the opening track on Mintus’ sterling new trio album, A Home In Between. As the music played, Mintus asked the children to draw portraits depicting their visions of peace. Those pictures—some drawn by Israeli children, others by Palestinians, all wholeheartedly optimistic—were later animated by Cermaque and posted to YouTube as a video titled “Can You Tell The Difference?” It’s a potent political commentary wrapped in a disarmingly beautiful melody, and it’s just one of many emotionally substantive tracks on this disc, Mintus’ third album since 2014. This is a new high point in the young musician’s career, the culmination of a period of deep reflection and change. In the liner notes, Mintus writes of a newfound ability to “let go” in the recording process, and the music reflects a noble prioritization of group-sound over the individual. The pianist has forged strong musical bonds with Israeli bassist Tamir Shmerling and Dutch drummer Philippe Lemm, and the trio has a way of infusing energy into every aspect of this music, even the silences. The impressionistic “In The Moment,” which was composed by all three musicians, is sparse, with structures assembling and dissolving in a wash of sound; the song’s momentum is maintained through constant transformation. “Taksim,” a Mintus original, takes a different tack, fusing well-established forms of traditional Israeli music, European classical and down-home Delta blues into a mash-up that reveals more similarities than differences. Interpretations of Warne Marsh’s “Background Music” and Charlie Chaplin’s “Smile” inherit a new shimmer under Mintus’ arrangements, which add hypnotic ostinatos, baroque flourishes and other fun-house elements to these timeless melodies. The bonus track, Mintus’ solo rendition of the standard “My Ideal,” closes the album on a note of enlightenment, providing a window into the mind of an artist of prodigious talent and boundless ambition.