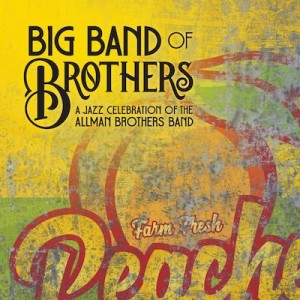 Albums offering jazz renditions of rock songs are commonplace nowadays, so the element of surprise has faded. But A Jazz Celebration Of The Allman Brothers Band is an accomplishment of a higher order. This is a collection of smart arrangements of classic jam-band material with a sturdy blues foundation crafted for a 15-piece big band.

A central figure for this project is drummer, producer and jazz educator Mark Lanter, who has played in the Allman Brothers tribute band Eat A Peach. Also key to the proceedings is trumpeter, jazz educator and New South Jazz Orchestra founder Shane Porter, who doesn’t appear on the album, but he contributed four arrangements, including a brilliant rendition of Dickey Betts’ “Les Brers In A Minor” (which appeared on the Allmans’ classic 1972 album, Eat A Peach).

Four guest artists add credibility and spice to the 63-minute program: Blues/Americana star Ruthie Foster delivers powerful lead vocals on “It’s Not My Cross To Bear” and “Don’t Keep Me Wonderin’”; Louisiana-bred singer-songwriter Marc Broussard takes the mic for “Whipping Post” and “Statesboro Blues”; Wycliffe Gordon wrote the arrangement for the latter tune and delivers a sturdy soprano trombone solo to “Don’t Want You No More”; and Jack Pearson, who was in the Allman Brothers Band from 1997–’99, injects some potent electric slide guitar work to “Stand Back.”

Overall, this album provides a new prism through which to appreciate the music of an iconic band, many of whose founding members are no longer with us, including guitarist Duane Allman (1946–’71), vocalist/keyboardist Gregg Allman (1947–2017), bassist Berry Oakley (1948–’72) and drummer Butch Trucks (1947–2017).