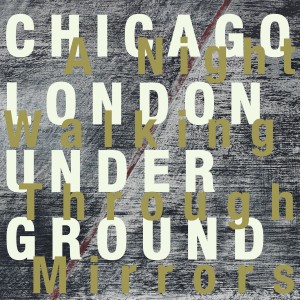 In their 20-plus years of collaboration, multi-instrumentalists Rob Mazurek and Chad Taylor have spent more years living away from the city that gave their Chicago Underground project its name than they’ve lived within it. Currently, Mazurek lives in Texas and Taylor in Pennsylvania, and their latest record documents a night spent with a couple of English musicians at London’s Café Oto.

It’s an intriguing match, but not an obvious one. John Edwards and Alexander Hawkins play together in the organ trio Decoy and Louis Moholo-Moholo’s U.K. ensembles, but their collective CV also includes Ethiopian composer Mulatu Astatke and vocal improviser Phil Minton. Taylor and Mazurek’s recent records have taken full advantage of electronic instruments and studio production. But this record is a mostly improvised live encounter that manages to sustain a robust forward momentum, even though there are multiple conversations happening at any moment.

The discourse between Taylor’s skittering drums and Hawkins’ intricate lines on “Mysteries Of Emanating Light” grows out of a recognizable free-jazz lineage, but when Mazurek’s vocal proclamations and Edwards’ exploding pulse blow in, the conversation moves off-planet. This music is less about arriving at any location than it is about an ongoing process of engagement, rupture and rapprochement, where the moments continually are broken and assembled anew.