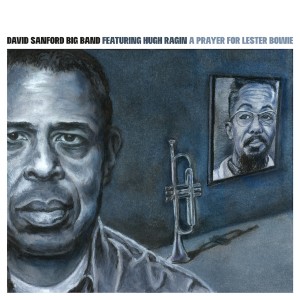 If there was only one reason to pray for the late Lester Bowie, it would be to give thanks. Not only did the trumpeter’s often-sardonic playing impart multiple dimensions of delight; the stylistic breadth of his work showed anyone listening how to combine art and entertainment with commitment and non-hierarchical inclusivity.

David Sanford’s latest album, named after a piece written by Art Ensemble associate member Hugh Ragin, doesn’t sound much like Bowie’s, but it is similarly welcoming. This is both a strength and occasional deficit.

Sanford, a long-time educator, composer and conductor, is equally adept at leading his big band through a streamlined, swinging performance of Dizzy Gillespie’s “Dizzy Atmosphere” as guiding the ensemble between dark atmospherics and polytonal blues on “Subtraf.”

The live-in-the-studio recording captures his music’s dynamic range, which encompasses subtle tenderness and enthusiastic overload. The ensemble’s exquisite rendition of shifting colors throughout “Woman in Shadows” is as satisfying as the quick-stepping duet between conguero Theo Moore and trombonist Jim Messbauer on “Full Immersion.”

Detours into a riffing rock feel a tad cartoonish. But if Bowie were on hand to comment, he’d probably suggest to just wait for the next tune to come along.