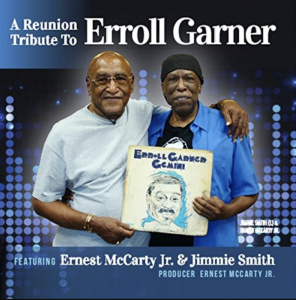 In July 2016, bassist Ernest McCarty Jr. and drummer Jimmie Smith got together after a four-decade hiatus. As alumni of Erroll Garner’s quartet, they decided it was time to pay tribute to their former leader by recording a set of tunes he had played with them onstage countless times.

Garner had a sound entirely his own. While this is an achievement to which all musicians might aspire, it challenges those who want to recognize that achievement without lapsing into imitation. For this reason, McCarty’s and Smith’s choice of Geri Allen (since deceased) was inspired. Although the arrangements and some elements of Allen’s playing do nod toward Garner, her approach overall lauds the spirit rather than the letter of his work.

On the Garner original “Gemini,” Allen’s improvisations include a few parallel fourths, as he often did in quick, ascending runs. But where Garner’s touch was lighter, especially in the upper register, Allen sticks more to the center of the keyboard. She plays more aggressively than he did; her solo lines are more apt to stray beyond the chords into more outside territory. Yet one never loses sight of the tune.

Smith and Noel Quintana fit together seamlessly, the drummer scaling back to give the conguero control of the groove on “Caravan.” This symbiosis allows Allen to speak in her own voice while honoring an irreplaceable predecessor.