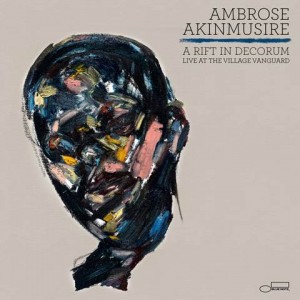 Ambrose Akinmusire is one of the most musically thoughtful artists I’ve had the pleasure of encountering during my tenure at DownBeat. He’s one of those rare players who can deliver a smile, a scowl, a surprise and a tear by simply telling stories through his trumpet. On A Rift In Decorum, his third album for the Blue Note label, Akinmusire presents this artistry live at the legendary Village Vanguard in New York. This amazing program documents his longtime working quartet of Sam Harris on piano, Harish Raghavan on bass and Justin Brown on drums playing very intimate music in one of the world’s greatest jazz shrines. “Justin and I have talked a lot about the spirits that we can feel in the Vanguard,” Akinmusire said in press materials for the record. “It’s like I’m being bear-hugged by the spirits in there. Especially in a time like now, it’s great to have a place that still exists in the way that it originally existed.” That reverence shines throughout this 14-track set of originals. It’s music that sneaks into your soul because whether fiery or quiet, nothing is ever rushed by these musicians; everything is thought out and purposeful. One example is “A Song To Exhale To (Diver Song).” It begins with Raghavan bowing the bass slowly and beautifully in a quiet duet with Harris’ piano. Notes are sparse. Every note is offered carefully, like prayer. When Akinmusire and Brown join in, it’s an uplifting of spirit with equal parts beauty and longing. The set’s opening number, “Maurice & Michael (Sorry I Didn’t Say Hello)” serves as a more driving version of this sense of loss, in this case lost opportunity. Akinmusire wrote the piece after not saying hello to an old friend from the neighborhood, one who might have been on something at time or maybe was just way down on his luck. It’s a song that examines, without words, the feelings that go into that type of missed encounter: anger, sorrow, embarrassment, reassessing one’s own life. That depth of self-reflection makes Akinmusire an amazingly effective composer—one who should be heard, studied and enjoyed.