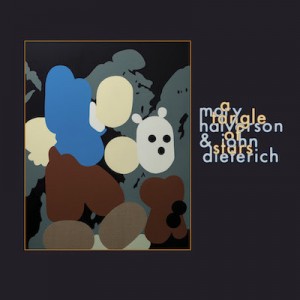 The quality of play, or creativity explored for its own sake, turns out to be rarer in music than one might assume.

A Tangle Of Stars, though, rightly describes guitarist Mary Halvorson and multi-instrumentalist John Dieterich’s interplay on their first recording together. Halvorson, a prolific bandleader and solo artist who recently was named a 2019 MacArthur Foundation Fellow, and Dieterich, best known for his work in experimental rock act Deerhoof, spent a year exchanging and building upon each other’s sketches.

The result is a tangle of sound and ideas, elegant in its conception and execution.

Opening with a brief interpretation of 20th-century composer J.D. Robb’s “Excerpt From Spatial Serenade,” Halvorson and Dieterich attack the composition’s angular peaks percussively. Meanwhile, a razor-like drone hovers menacingly overhead. The second track, “Drum The Rubber Hate,” opens with an airy, folkish melodic contraption. A baritone guitar’s droning bass line bounces alongside it, containing form within its boundaries, while the melody evolves into a distorted, modal electric guitar solo before returning again to its starting point.

The shimmering guitars on “Lace Cap” float around each other, playing alternatively separately and together, meeting unpredictably at moments of dissonance and harmony. While some improvisations stick around in the memory less than others, enough achieve these serendipitous moments to reward multiple listens.