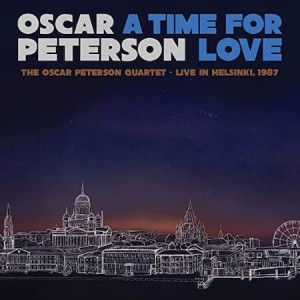 While the title of this album is A Time For Love, a more apt heading might be A Time To Burn because that’s exactly what Peterson and his quartet do throughout this 12-tune blast of joy. The recording captures Peterson, guitarist Joe Pass, bassist Dave Young and drummer Martin Drew on the last show of the group’s 1987 fall tour. “There was no set list. Just get out there and play,” Young wrote in the liner notes. “Just by Oscar playing an intro, we’d know.” Those notes also include an eloquent tribute to Peterson by pianist Benny Green as well as some loving words from Oscar’s widow, Kelly Peterson. Packaging aside, the music is the star here. The pianist is at the height of his musical prowess. The same can be said for guitarist Pass. If listening to the two of them blistering through “Sushi” can’t slap a smile on your face, get to the emergency room. While Young and Drew lock the rhythm in a chokehold of swing, Peterson and Pass dance with unlimited imagination across their instruments. “A Salute To Bach” offers more of that goodness at a breakneck tempo, turning the work of the iconic Baroque-era classical composer into hard-burning bebop. Clocking in at more than 20 minutes, the interplay between Pass and Peterson is, again, unbelievably intricate, demonstrating a mastery that few in the history of jazz could ever match. Young also takes a terrific bass solo on the tune. “Love” is in the title of this album, and there are certainly some wonderful ballads here such as the aptly named “Love Ballade” as well as the title cut. The intro to the latter offers a nice glimpse of Peterson’s classy onstage persona as he introduces the band before drifting elegantly into his keyboard. There is so much to love on this recording. The sound of Peterson patting his foot along to the beat of “How High The Moon” gives this music that edge of authenticity as something truly live, organic and exquisitely recorded. “Waltz For Debbie” swings dreamlike; “When You Wish Upon A Star” gives goosebumps as Pass quietly picks the intro, then plays the tune solo. It’s hauntingly beautiful. The 18-minute “Duke Ellington Medley” is a joy, and the closer, Peterson’s own “Blues Etude,” serves as a full-out sprint to the end, complete with Peterson’s solo stride break in the middle. Whew! This is jazz as good as it gets, as the crowd’s raucous applause at the end demonstrates.