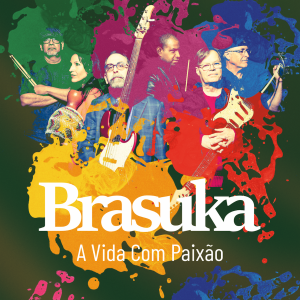 Brasuka’s lead vocalist and keyboard player, Rosana Eckert, says the sextet’s international flavor is due in part to members from Cuba, Uruguay and Puerto Rico. The Dallas-based band has been together for 10 years but, since they all have teaching jobs, planning gigs and rehearsals is problematic. Everyone in the band contributed compositions and production to the album, making this debut delightful.

Free-flowing arrangements and superb musicianship make it difficult to pick a favorite track. Notable moments include “Deusa Do Meu Carnaval,” a samba that opens with the band singing smooth harmonies to accent the melody, then ramps up into a free-flowing, percussion-heavy jam, featuring Daniel Pardo’s flute and melodica and the band’s exuberant scat singing. “A Vida Com Paixão” rides a reggae pulse, provided by Eckert’s piano and Tom Burchill’s electric guitar.

The subtle rhythm of “Marakandombe” combines Urugauyan candombe and maracatu, a percussion-driven, African-influenced music from Northeastern Brazil. Eckert sings a lilting scat hook, over a cadence provided by the band’s clapping hands, cowbells and congas, highlighted by a metallic guitar solo from Burchill. The album closes with a rock arrangement of “Sgt. Pepper’s Lonely Hearts Club Band.” It’s energetic, but doesn’t quite fit with the complex international rhythms that make up the rest of the album.