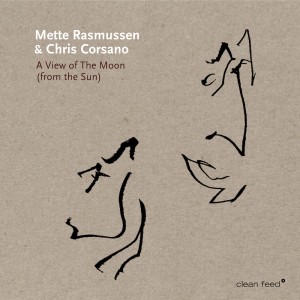 Mette Rasmussen, a Danish alto saxophonist who lives in Norway, is a versatile player who’s equally at home occupying a chair with the Trondheim Jazz Orchestra or making a guest appearance with anti-capitalist symphonic rock ensemble Godspeed You! Black Emperor. She has a particular rapport with American improvisers who prize intensity over genre purity, such as guitarist Tashi Dorji, and drummers Tyler Damon and Chris Corsano.

A View Of The Moon (From The Sun), her third recording with Corsano, was captured live at the Ljubljana Jazz Festival on July 4, 2015, and provides a splendid opportunity to hear both performers unfurl their respective freak flags.

Corsano’s spent as much time playing with psychedelic noise-makers like guitarist Bill Nace and shahi baaja player Mick Flower as he has touring with free-jazz veterans such as saxophonists Akira Sakata and Paul Flaherty. Sonic Youth co-founder Thurston Moore’s also been a frequent collaborator. But Corsano’s an accomplished one-man band, too. In that setting, he often uses reeds, as well as drums, to whip up a sonic fervor that frequently sounds like it’s all on the verge of collapse, but never quite falls apart. He brings these same sonic resources to his work with Rasmussen.

The reedist opens A View Of The Moon (From The Sun) with keening cries, shifting between her horn’s lowest register and its highest-pitched tendrils of sound on “Many People Were Scandalized—Some Still Are.” At first, Corsano buoys her lines with a pummeling onslaught, but soon reins things in with a quiet wash of cymbals. The saxophonist matches his maneuvers, and when he eases back, Rasmussen slips into an abstracted blues that mixes up pages from the playbooks of Johnny Hodges and Mats Gustafsson. This builds to a pugilistic summit, and then they’re off exploring another zone.

On “Let’s Have A Raincheck On The Franchise,” Rasmussen’s muted horn ripples like a flag in a stiff, hot breeze as Corsano encircles her lines with a stream of snare strikes and bell tones that propel the music without ever settling into a steady meter. A bit later in the set, the percussionist limns the saxophonist’s forlorn lines with ghostly metal sonorities, and then picks up a slide clarinet and layers long tones against her stuttering, avian cries.

The duo applies its astounding variety of sounds to highly expressive ends, balancing moments of giddy wildness with solemn interludes. Come for the thrill, stay for the spirit.

A View Of The Moon (From The Sun): Many People Were Scandalized—Some Still Are; Folding In On Itself; Let’s Have A Raincheck On The Franchise; Today’s White Blood Cell; Well Now, There, Then; You’re Breaking Up, The House Is Going Through A Tunnel; A Detail; Another Detail. (57:05)
Personnel: Mette Rasmussen, alto saxophone; Chris Corsano, drums, slide clarinets.