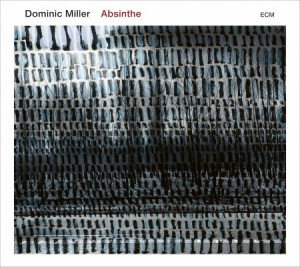 Argentine-born guitarist Dominic Miller is probably better known as a Sting sideman than a solo artist, though he has more than a dozen albums to his name.

His first ECM disc, 2017’s Silent Light, primarily was a solo effort, with only a percussionist joining him on five of its 11 tracks. But for Absinthe, a collection of pieces that conjure all sorts of moods, Miller’s assembled a full band.

On softer tracks like “Mixed Blessing” and “Christiania,” the combination of fingerpicked guitar and Santiago Arias’ bandoneon can feel like dinner music at a sidewalk café. Other pieces, like “Étude” and “Bicycle,” have an intensity almost worthy of a rock band. Mike Lindup’s synths are mostly in the background, though he does take a brief, progish solo on “Bicycle.” On the two-minute “La Petite Reine,” Manu Katché’s toms seem to come up from the core of the earth, booming under a delicately plucked guitar figure, and on “Ombu,” his playing is slow and patient, but at times positively thunderous. The piece breaks down into something that’s not quite a drum solo, but definitely puts him in the lead spot, with the band responding to his phrasing. As it all winds down, bassist Nicholas Fiszman heads into a dub zone, locking in with Katché for a deep, but tantalizingly short, groove passage.

It’s doubtful that Miller’s looking to give up that Sting gig anytime soon in favor of stepping out on his own full-time, but an album as strong as Absinthe makes it clear that he could.