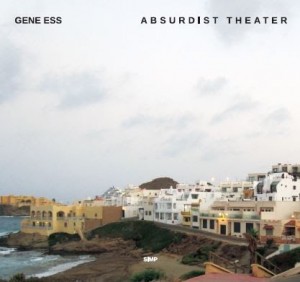 Tonally, there’s an arresting beauty to the combination of wordless vocals and guitar. Perhaps it’s the similarity in timbre that so pleases the ear, or maybe it’s that the instruments share a close association in the history of music. Whatever the case, it’s a solemn pairing used to masterful effect by guitarist Gene Ess on his latest album, Absurdist Theater, which features gifted vocalist Thana Alexa. The result is music of a heartfelt and spiritual sort, with songs that feel as imbued with passion as they are guided by intellect. Those polar forces are in constant play throughout the program. Among the album’s more fervent pieces are “Out Of The Ashes,” a potent distillation of modern jazz themes, and “Torii,” a vibrating engine of prog-rock energy. In addition to Alexa and the Tokyo-born Ess, the ensemble features drummer Clarence Penn, pianist Manuel Valera and bassist Yasushi Nakamura. This group does an outstanding job of maintaining clarity through the most intricate of passages. “Kunai” has a particularly knotty melody that Ess and Alexa handle with focused aplomb, and the pummeling tempo of “Onward And Upward” proves no obstacle for Penn and Valera, who deliver powerful solos here. And though the flame is turned down on the ballads “Dejala Que Passe” and “Jade Stones,” the outsize presence of this ensemble hardly diminishes. Ess and crew maintain a consistent sensibility, one that successfully marries liberated enthusiasm with clean compositional elegance. Even during the band’s most formidable moments—the strong yet sinewy piano solos, the slow-rolling vocal waterfalls, the overdriven guitar squalls—the players maintain an emphasis on musical finesse.