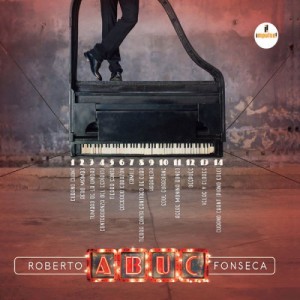 Cuban pianist and keyboardist Roberto Fonseca took the name of his native country and spelled it backwards for title of his eighth album, ABUC. On this outstanding disc (one of the best albums of 2016), he explores the music of Cuba’s past while also crafting an aural portrait that sounds very much like the present day. In this mesmerizing 53-minute program, the past and present are gleefully intertwined in music that will prompt listeners to hit the dance floor. Fonseca touches upon many styles, including contradanza, mambo, cha-cha-chá, danzon, bolero and descarga jam sessions. Fonseca turns to the past by opening the album with the infectious grooves of an 11-musician arrangement of Ray Bryant’s “Cubano Chant.” Fonseca closes the album with a lovely solo piano rendition of that tune. Between those bookends, he focuses on original material. Elements of yesterday and today merge in the infectious “Afro Mambo,” which incorporates a fragment of a 1940s/’50s-era mambo and an electronic beat. Similarly, old-school and 21st century elements are combined in “Tumbao De La Unidad,” which features Fonseca’s hero Eliades Ochoa (vocals and guitar) as well as sonic effects such as reverb and delay. On “Soul Guardians,” the hip-hop-influenced vocals by Alexey Rodríguez (of the band Obsesión) illustrate that when it comes to the music of Cuba, Fonseca is definitely looking forward. Overall, this superb album showcases Fonseca as an ambitious master of sonic dynamics.