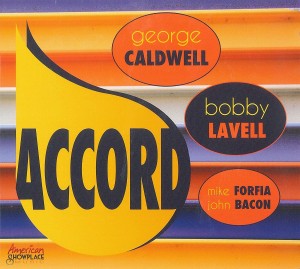 While their takes on such Great American Songbook entries as “Yesterdays” and “All Of You” are comfortable, pianist Caldwell, tenor saxophonist LaVell, bassist Forfia and drummer Bacon hold their fire for originals, particularly LaVell’s driving “My Love For John” (a sheets-of-sound homage to John Coltrane), Caldwell’s title track and LaVell’s smoking “Do You Believe.” The band also turns in nourishing versions of Monk’s “Bye-Ya;” “Elation,” an aspirational tune by Mulgrew Miller and Vincent Herring; and Herbie Hancock’s lovely “Dolphin Dance.”

While this is a traditional quartet—it’s been a long time since trading fours felt less clichéd and more exciting—it also can be edgy, eschewing tropes for drive in the originals.

The band knows how to build drama, and the more classical Caldwell and the more soulful LaVell are effective foils for each other. They’re so comfortable with each other that they know how to tell a story: “Like Someone In Love,” featuring Caldwell at his most assertive, is warm, narrative jazz. The sequencing, too, is effective, as “Elation” gives way to LaVell’s Coltrane homage and the sweep of “The Second Time Around” segues into the Porter closer.

Does this album blaze trails? No. Is it rewarding? Absolutely. Accord suggests a trip to Buffalo might lead to some jazz revelation.

Accord: Yesterdays; Double Take; Bye-Ya; Like Someone In Love; Dolphin Dance; My Love For John; Elation; Do You Believe; The Second Time Around; All Of You. (64:00)
Personnel: George Caldwell, piano; Bobby LaVell, tenor saxo- phone; Mike Forfia, bass; John Bacon, drums.