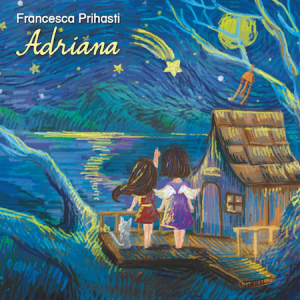 Indonesian-born, New York-based pianist and composer Francesca Prihasti has traveled the distance from the Sydney Conservatorium of Music to New York University, landing some stellar players to accompany her along the way. For her third outing, Adriana, Prihasti has assembled a fine ensemble for an essentially mellow set of original compositions.

reedist Dave Pietro. Guitarist Nic Vardanega, a frequent Prihasti collaborator, adds nice slices of guitar, whether on the sleek and urban modern fusion of “Johnny” or on the contrasting breezy and pastoral “Verano.”

The cool-toned “Time Traveller” gives Pietro the spotlight. But the title song is a serious, somewhat somber affair, until Rodriguez’s horn flies into orbit, circling the piano-and-guitar conversation. “Stargazer” is a peaceful ballad with Prihasti leading the melody from the bench and Ferber taking his turn. “The Wind Chimes” also showcase Pietro and Ferber in tandem, and in solo spots.

While Adriana is cool and laidback, suitable for a summer night, Prihasti has primed herself and her band to play under bigger lights: Could be time for a label to support her tireless and generous self-released work.