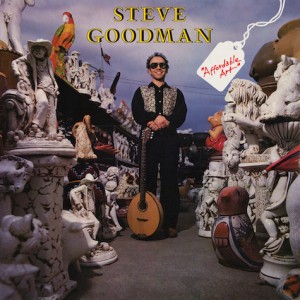 Singer-songwriter Steve Goodman (1948–’84) has been gone for roughly the same amount of time that he wandered the Earth: It’s been 35 years since he succumbed to leukemia at age 36. In recent years, his legacy might have dimmed a bit, as the album No Big Surprise: The Steve Goodman Anthology and the all-star outing Tribute To Steve Goodman both fell out of print. The Omnivore label seeks to reverse that process in a big way with reissues of four Goodman albums, all loaded with numerous bonus tracks, including the sparkling gem Affordable Art (1984).

More successful as a composer than as a recording artist, Goodman penned “City Of New Orleans,” a modern classic that has been recorded dozens of times, most famously by Arlo Guthrie and Willie Nelson. Goodman and his close friend and fellow folkie John Prine teamed up to write “You Never Even Called Me By My Name,” which David Allan Coe transformed into a country hit in 1975. (Live versions of those two tunes appear on Omnivore’s reissue of Artistic Hair, originally released in 1983.)

Prine shows up twice in this program—as the co-writer of the slight but charming “How Much Tequila (Did I Drink Last Night?)” and as the composer and duet partner on the brilliant, devastating “Souvenirs.” Goodman, who’s often compared to Prine, was a songwriter of many moods, and the original LP of Affordable Art demonstrated that he could craft material that was sad (“California Promises”), silly (“Talk Backwards”), sentimental (“Old Smoothies”) or surreal (“Watchin’ Joey Glow”).

At his best, few could match Goodman’s wit. He collaborated with two other clever tunesmiths—Shel Silverstein and Michael Peter Smith—for “Vegematic,” the hilarious, insanely catchy tale of a man who falls asleep in front of a TV and then, in a somnambulant state, answers “every single one of those late-night, mail-order ads.” Cynical Baby Boomers will appreciate the song’s stealthy stab at consumerism, particularly the line about “an autographed photograph of Rin Tin Tin at Six Flags Over Burbank.”

Affordable Art is the best of the four reissues, but the other collections have their merits—particularly for Goodman completionists. Omnivore’s version of Santa Ana Winds (1984) is marred by production values that haven’t aged well, but bolstered by a jazz-infused reading of “The Big Rock Candy Mountain.” Unfinished Business (1987) is an uneven collection of demos, outtakes and unissued recordings compiled by Goodman’s manager, Al Bunetta. Though the songwriter fought fatigue as his health failed, Goodman’s skills as an expressive folk guitarist survived, as evidenced by many fine performances chronicled on these four albums.