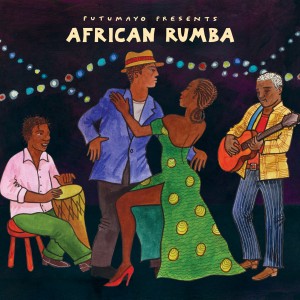 Since 1993, the Putumayo label has been introducing listeners to numerous types of world music. The label’s compilations are often a great starting point for exploring an individual artist’s oeuvre, or for learning about the various styles of music from a specific country or region. The tracks on the collection African Rumba span from 1956 to 2015, but most of this music is from the past decade. The focus is on Afro-Latin dance music that melds rhythms/traditions from Africa with those from Cuba. That merger is exemplified by “Aminata,” an exhilarating track by Senegalese bassist Alune Wade and Cuban pianist Harold López-Nussa that appeared on their 2015 collaborative album Havana–Paris–Dakar (World Village). Another highlight here is Wade’s tune “Mame,” which showcases the talents of an artist who has worked with Bobby McFerrin, Youssou N’Dour and Joe Zawinul. The compilation’s liner notes don’t list any individual musician credits, but they do include a short essay on each track, allowing listeners to learn more about artists such as Orchestre OK Jazz, Pape Fall et L’African Salsa, Ricardo Lemvo & Makina Loca, Banda Maravilha and Michel Pinheiro’s African Salsa Orchestra. No matter what a listener’s level of familiarity is with Afro-Latin music, there are plenty of tunes here that will motivate him or her to hit the dance floor.