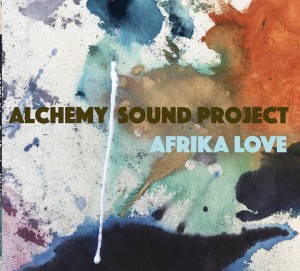 In this third release of the Alchemy Sound Project, the five core members have a track apiece on Afrika Love. The title tune, composed by Salim Washington, has a tinge of the Afrofuturism so resonant of Sun Ra and his Arkestra. Washington and Erica Lindsay’s tenor saxophones converge and then dart apart with a shared sense of urgency and artistic smears. Key to their separate solos is the insinuation of swing that pianist Sumi Tonooka captures flawlessly, before laying the chordal matrix for Washington’s ferocious coda.

Tonooka’s “Dark Blue Residue” is a study in brilliance, and the ensemble delivers a cohesion that is as perfect as it is impressive. On “The Fountain,” bassist David Arend’s tune (he also produced the album), it’s not easy to match the speed and agility of drummer Chad Taylor, but the group succeeds and again the collective precision is remarkable. As the opening track it establishes an energy and excellence that never recedes.

“Kesii” is Lindsay’s composition, but Tonooka owns it. Her performance here is invested with all the imaginative intuition that comes with careful absorption of those Detroit pianists she studied.