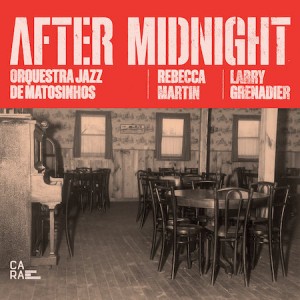 Portugal’s Orquestra Jazz De Matosinhos was created in 1997 as a non-profit institution, and through the years it has worked with such American artists as Carla Bley, Lee Konitz, Kurt Rosenwinkel, Maria Schneider, Dee Dee Bridgewater and Fred Hersch. For After Midnight, which was recorded right before the pandemic, they are joined by singer/songwriter Rebecca Martin and her husband, bassist Larry Grenadier.

While Martin is a skilled songwriter and lyricist, her pitchy voice is an acquired taste, as is her bland delivery. One should concentrate on the messages of her lyrics rather than her tone. On After Midnight, she makes that a little easier by having her 11 songs with the big band followed by bonus cuts: solo readings of the lyrics by 11 different women. The big band performs arrangements by their director Pedro Guedes, Carlos Azevedo and two from Guillermo Klein. There are occasional solos such as by an altoist on “The Space In A Song To Think,” drum breaks from Marcus Cavaleiro on “In The Nick Of Time,” guitarist Andre Fernandes during “After Midnight” and Grenadier on several pieces. But the orchestra is mostly in a subsidiary role, and the lack of mood and tempo variations is unfortunate. There are some who enjoy Bob Dylan’s singing while others find him difficult to sit through. For me, the latter is true of this Rebecca Martin showcase.

After Midnight: The Space In A Song To Think; In The Nick Of Time (State Of The Union); Brother, Can You Spare A Dime; Kentucky Babe; After Midnight; Portrait; Don’t Mean A Thing at All; Willow Weep For Me; All Day Long She Wrote; Lush Life; Joey. (51:58)
Personnel: Rebecca Martin, vocals, guitar; Larry Grenadier, bass; numerous additional musicians.
Ordering Info: orquestrajazzdematosinhos.bandcamp.com