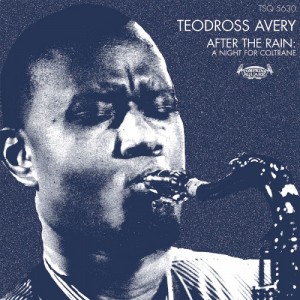 It’s a long-established practice for musicians to tackle the challenging compositions of their forebears, but to adapt the work of John Coltrane takes guts. The legendary saxophonist’s music was complex, sure, but his recordings also were as much about personal fire as compositional rigor.

Whether it was hubris or spiritual possession, something drove saxophonist Teodross Avery to tangle with six Coltrane-associated pieces for After The Rain: A Night For Coltrane. Luckily, Avery and his group take to the music with relish; it might not touch “the real thing,” but they do the compositions justice, technically and emotively.

The sound from this live date is crisp and clear, the nuances of the space and the performance is well captured. The players have done their homework: Avery does an admirable job conjuring those signature sheets of sound, and while Jeff Chambers tends toward a more thundering bass than Jimmy Garrison, it serves the set, especially on the extended take of “Africa.” Adam Shulman’s piano and Darrell Green’s drums are reverent to the Tyner/Jones diad without being wholly imitative. The song selection also warrants kudos for playing to this band’s strengths, while avoiding obvious choices. Avery dodges the dense improvisational thickets of Coltrane’s later work, but he also skips the hits: no “My Favorite Things,” “Giant Steps,” “Impressions.” In lesser hands, his chutzpah might’ve yielded some disappointed customers, but it’s hard to imagine disgruntled listeners walking away from the music here. And while After The Rain isn’t as essential as the recordings of its primary composer, the album pays fitting tribute to a giant. That in itself is no mean feat.