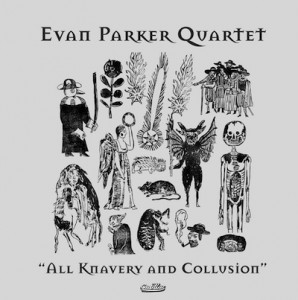 While British saxophonist Evan Parker has been duly celebrated for his mastery of free improvisation, his roots are deep in jazz. He has maintained performances that he himself calls his “jazz” gigs, such as a regular monthly show at London’s Vortex.

The superb quartet on this new album joined him for one such gig in June 2019, and the next day they went into the studio. This date was delayed, like so many things, by the onset of the COVID pandemic — which the skeptical musician has cruelly dismissed as something of a ruse — and the title and some tracks were named after passages from Daniel Defoe’s A Journal of the Plague Year. Luckily, Parker’s COVID denial goes no further in this particular project, a wonderful document of the sort of feverish group interplay he’s thrived upon for a half-century.

Although composer credits are given, the music is all improvised. Most of the seven tracks come in uncharacteristically bite-sized chunks, ranging from two to eight minutes, and some subtle fades suggest edits. Only the 24-minute “The Weather Set In Hot” resembles the kind of extended excursion we’ve come to expect from Parker. Still, the music is superb, whether fueled by the febrile tangles, thwacks and astringent arco strokes bassist John Edwards unleashes on “The Alchemy Of John Edwards” or the halting chords and flurries pianist Alexander Hawkins uses to slow down time on “A Blazing Star Or Comet Appeared.” But it is the long track that’s most satisfying, as the music patiently builds up its head of steam, each participant getting their say while inextricably connected to the flow of the ensemble.

All Knavery And Collusion: All Knavery And Collusion; The Alchemy Of John Edwards; A Well Staring At The Sky; The Influence Of The Dog Star; A Blazing Star Or Comet Appeared; The Weather Set In Hot; Art Is A Science… . (51:35)
Personnel: Evan Parker, tenor saxophone; Alexander Hawkins, piano; John Edwards, bass; Paul Lytton, drums.
Ordering Info: cadillacrecords77.com