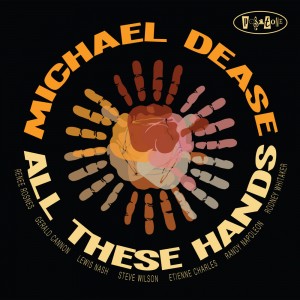 With mass culture perpetually threatening to swamp our country’s beloved particulars, it’s hard overestimate the value of regionalism. The “hands” in the title of trombonist Michael Dease’s latest disc harks to those who helped shape the specifics—nuance, tone, feel, etc.— of jazz’s evolution, from its N’awlins origins to the myriad variations that blossomed as it took hold in other domestic locales.

The album is designed as a travelogue. The breezy “Creole County” and steamy “Delta City Crossroads” echo the strong basis that the South provided jazz. Georgia native Dease mutes his horn for the latter, a duet with guitarist Randy Napoleon, and it’s just as gritty as it is fetching. Like a few of the tracks, it’s a miniature that buffers ensemble pieces. Its cousin, a nod to the Midwest territory bands of the ’30s, puts bassist Rodney Whittaker up front, a homage perhaps to that ancient scene’s key figure, Walter Page.

The ensemble brings zest to this solid book. Renee Rosnes, Gerald Cannon, Lewis Nash and Steve Wilson form the core band, with guests steadily cropping up. From the Philly hard-bop of “Benny’s Bounce” to the itchy pulse of “Chocolate City,” they form a strong alliance. Both trumpeter Etienne Charles and the leader shine on the latter, a tone-poem salute to the clattering bustle of D.C. train cars. Indeed, the authority of Dease’s playing resounds across the album; as an improviser, he’s firing on all cylinders these days, and this robust affair is not only a fun glance at the music’s diversity, but an entertaining study in blues permutations.