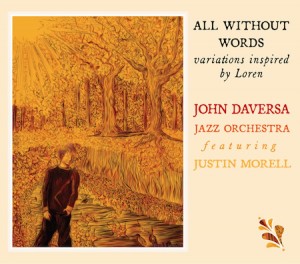 All Without Words is an ambitious concerto for trumpet and orchestra that gives voice to the voiceless in more ways than one. John Daversa’s dry, expressive trumpet speaks for Loren Morell, the non-verbal, autistic son of composer Justin Morell, whose thoughtfully titled movements reflect stages in the relationship.

This is a long, serious work with a complex agenda, primarily an aim to heal. It does not swing, and it’s not about virtuosity, even though the musicians Daversa and Morell have assembled sound absolutely organic in Kabir Sehgal’s sumptuous production.

Each track stands on its own, though the careful sequencing and thematic progression strongly suggest that the best way to experience this would be in its proper sequence at a standalone concert.