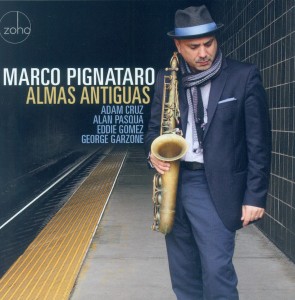 Some albums speak only to musicians’ collective talent and skill, the fruit of their labors worn like battle scars or trophies. Infrequently does music speak only to the joys of life, to calm, rest and love. But saxophonist Marco Pignataro’s second release, Almas Antiguas, is such an album.

Joined by a heavyweight and empathetic cast performing select covers and his original material, Pignataro tells stories bursting with emotion and vibrance. The album opens with “Panarea,” underpinned by the bandleader’s keening soprano saxophone, which has all the yearning and organic intensity of a siren’s call. Plaintive and imbued with the air of the ancients, the song introduces Almas Antiguas as Mediterranean-inspired, yet tilted by Latin-esque rhythmic pleas. “Xalapa,” which refers to the mountain capital of Veracruz, Mexico, is a wistful ballad propelled by Adam Cruz’s brushwork and Alan Pasqua’s sparse, elegant piano cadences. Cruz drives the bubbly “Calle Mayaguez,” named for the Puerto Rican street where Pignataro visited his grandparents as a child. Almas Antiguas—which closes with “Song For Lucy,” a reverie dedicated to Pignataro’s wife—is so heartwarming as to be dreamlike, invoking love and passion as life’s true goals, the heart as the only organ that matters.