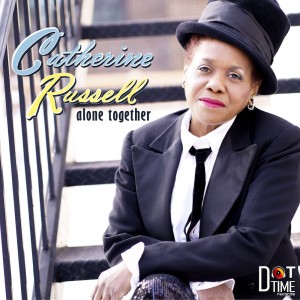 With her 2016 album, Harlem On My Mind, released when she was 60 years old, Catherine Russell completed the challenging journey to the spotlight that’s the focus of the film 20 Feet From Stardom. Her Grammy nomination for the album signaled that she no longer was just the voice behind artists ranging from David Bowie to Rosanne Cash; she had arrived on her own.

With her follow-up, the vocalist moves further into the space previously dominated by Cécile McLorin Salvant. Like the younger singer, Russell mines a trove of forgotten torch songs from the early 20th century, as well as more recognizable standards. Wisely, Russell chose not just to select a mixed bag of songs; rather, Alone Together pulls together a baker’s dozen that forms a cohesive narrative with the singer as the lead character.

On a bluesy “I Wonder,” “Early In The Morning” and “Is You Is Or Is You Ain’t My Baby?” she’s the wounded lover, unsure of whether her partner is being true. But Russell’s steely delivery, reminiscent of a young Dinah Washington, makes clear she’s not playing the victim. On the spicy “He May Be Your Dog But He’s Wearing My Collar,” recorded by Rosa Henderson in 1924, she takes things into her own hands in a scenario that Henderson passed through the decades to salty-tongued successors like Millie Jackson and Meshell Ndegeocello.

With an unerring ear for great material and a voice that sounds timeless, Russell is making up for lost time.