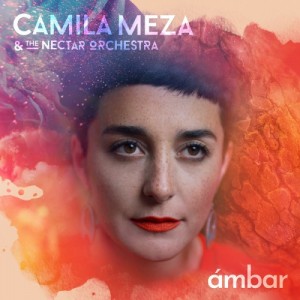 Camila Meza’s voice puts me in mind of Miles Davis, which is odd because her music is nothing like his. Ámbar, her fourth solo album, is lush and light-footed, full of chamber-style string writing and grounded in the music of South America, all qualities not normally associated with Davis. And yet, there’s something about the resolute straightness of her sound, and the way it manages to be so emotionally expressive with so little vibrato, that seems completely of a piece with Davis’ aesthetic. Mainly, it’s a matter of confidence: Like Davis, Meza seems so sure of her approach—her pitch, her diction, her understanding of the lyric—that any additional ornamentation would be overkill.

Between the deftly propulsive violins and intricately polyrhythmic drums and bass, the arrangements here recall Fabian Almazan & Rhizome, a group with which Meza also sings and plays guitar. But where Almazan’s ensemble is deeply invested in improvisation, Meza and The Nectar Orchestra keep focus on the songs. That’s not to say there aren’t solos, as Meza’s guitar is heard frequently, and to particularly strong effect on the Pat Metheny/David Bowie tune “This Is Not America.” But it’s Meza’s voice that’s front and center, and she’s absolutely riveting—in three languages. She’s an insightful interpreter, and offers a rendition of Milton Nascimento’s “Milagre Dos Peixes” that rivals his own. But the real gems here are her originals, particularly the thrummingly majestic “Kallfu” and affectingly romantic “All Your Colors.”