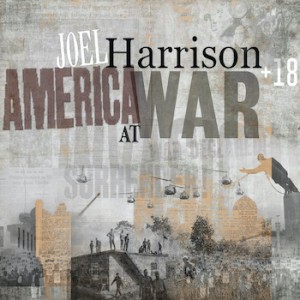 For all of guitarist Joel Harrison’s 62 years, the United States has been entangled in overseas military exploits, sometimes bringing the conflict home. This epic saga warrants bold and thoughtful compositions, and throughout America At War, Harrison’s music proves ideal for such a demanding story. The album also marks Harrison’s return to the orchestral approach he brought to a 19-member ensemble for 2013’s Infinite Possibility. The group here shows its flexibility not only in adapting and personalizing different eras’ musical cues, but through tonal and tempo shifts within each piece.

“March On Washington” blends the big band’s lush textures with Harrison’s funk in a way that recalls blaxploitation soundtracks that Johnny Pate assembled in the early 1970s. But about midway through, his guitar solo leads the band in a surprisingly different direction. Jared Schonig’s drum attack breaks the serenity of Ned Rothenberg’s shakuhachi on the haunting “My Father In Nagasaki,” while Harrison makes his political inclinations clear on “Yellowcake,” a tune that includes samples of President George W. Bush’s stated reasoning for the 2003 Iraq invasion; Jon Irabagon’s saxophone lifts the song beyond polemics. And on “Stupid, Pointless, Heartless Drug Wars,” the music itself delivers the message, the ensemble summoning the sounds of a New Orleans funeral march.