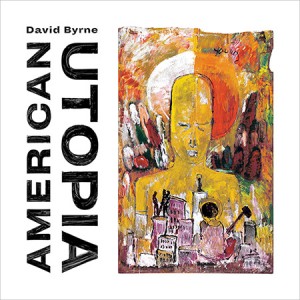 There is no irony in the title of David Byrne’s new solo album, his first since 2004’s Grown Backwards (Nonesuch). American Utopia refers not to a specific utopia, but the longing, frustration, aspirations, fears, desires and hopes of those of us who hold onto the American Dream and refuse to succumb to despair or cynicism during these times of cultural upheaval. The 10 songs here, all original Byrne compositions bearing an air of optimism, are an attempt to depict the world in which we live and ask, “Is there another way?”

The music, which, like much of Byrne’s work, reflects the influence of producer/programmer Brian Eno, combines highly ambient sounds and textures with Byrne’s trademark vocals. It’s a voice that has aged well since Byrne’s days as an angry, quirky young tenor fronting Talking Heads. Listeners can hear him holding certain notes for a longer duration (especially at the ends of phrases), utilizing the voice in a more musical manner. And he shows a seasoned singer’s respect for intonation—dig how accurately and brilliantly his high B-flat rings out on “Bullet.”

The process of writing and recording the material for American Utopia was an evolution that began with longtime collaborator Eno and grew to include collaboration with producer Rodaidh McDonald and a cast of creative contributors, including electronic musicians Daniel Lopatin and Jam City, keyboardist/producer Thomas Bartlett, vocalist/keyboardist Sampha, vocalist/multi-instrumentalist Jack Peñate, saxophonist Isaiah Barr and others. A video companion piece to “Everybody’s Coming To My House” that’s in keeping with Byrne’s famously quirky concepts about visual art can be viewed here.

Byrne has scheduled a series of choreographed live concerts that he describes as the most ambitious shows he has undertaken since the 1983 Talking Heads performances that were filmed to make the movie and album Stop Making Sense. He will appear this month at Lollapalooza festivals in Santiago, Chile (March 16), Buenos Aires, Argentina (March 18), and São Paulo, Brazil (March 24), followed by concerts in Guadalajara, Mexico (April 7), Indio, California (April 14, 21), and Atlanta (May 4-5). Byrne then will embark on a world tour that kicks off June 22-23 in Prague, Czech Republic, and runs through late July.